Extra virgin olive oil is considered the best among the existing varieties of olive oil. It is the only oil that is extracted from a fresh fruit in a totally natural way. Its organoleptic properties and characteristics make it an essential element in all meals.

What makes Bellina Extra Virgin olive oil a prestigious brand is its excellent raw materials, its elaboration process carried out in the most natural way while taking care of every single detail, the unique benefits for health… But above all, its low acidity makes it unique, giving this oil an exquisite and excellent taste. The best of the Mediterranean diet, the highest quality liquid gold at your table to transform each of your meals in a unique moment. 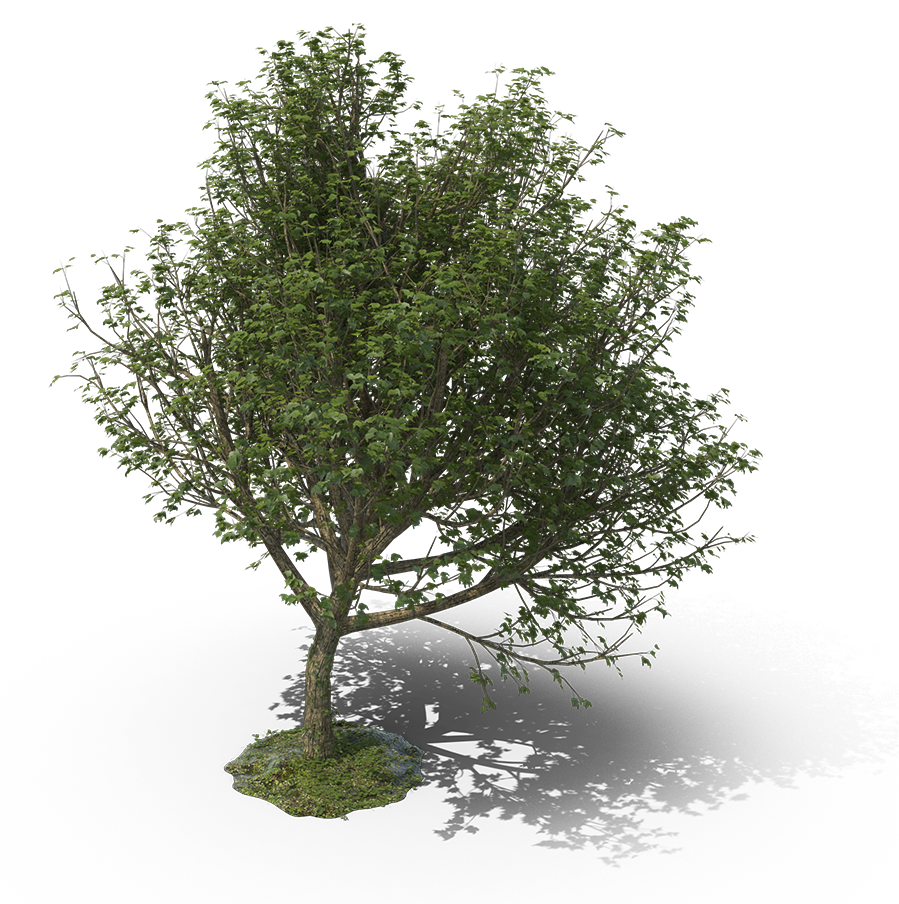 Everything begins in olive groves. The combination of sustainable and ecological olive growing, tradition and technology makes Bellina produce the best oil while being respectful with the environment and obtaining the best results. Olives are harvested at the end of autumn or the beginning of winter, choosing the moment when olives have their maximum level of fatty acids in the olive pulp, and therefore the best properties.

From among all recollection systems, Bellina uses the one that causes less damage to olives, to avoid deterioration. Traditional manual recollection habits have been transferred to the most developed technology that improves the process and guarantees. Once they have been collected, olives are cleaned and sieved, eliminating residues such as leaves, stems, soil or small stones. They are then washed with cold water to remove other foreign bodies such as dust, mud and possible residues of herbicides.

Finally, they are stored in small piles waiting to be transported to the olive press where oil will be obtained. During the whole process a thorough control of the raw materials is carried out to obtain the highest possible quality in the subsequent processes.

Oil production
is made in 6 phases 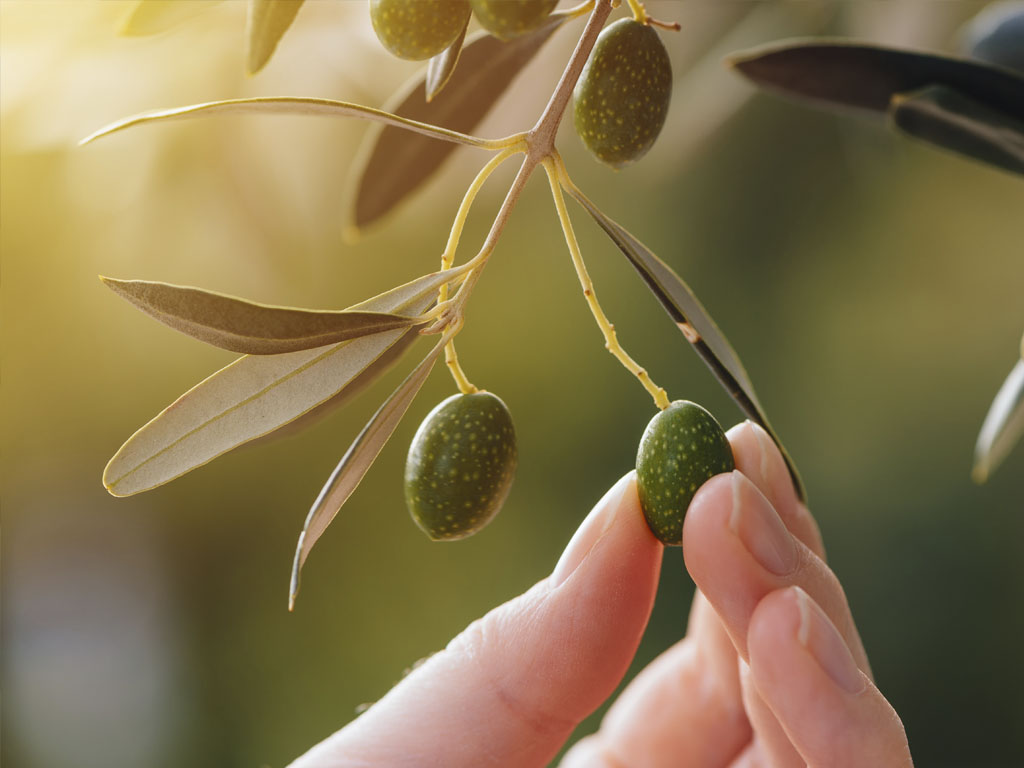 After the olives have been collected there is a verification process in the oil press so as to check that defective olives are separated from the healthy ones. The main purpose of this is to control olive entrance in the different lines. 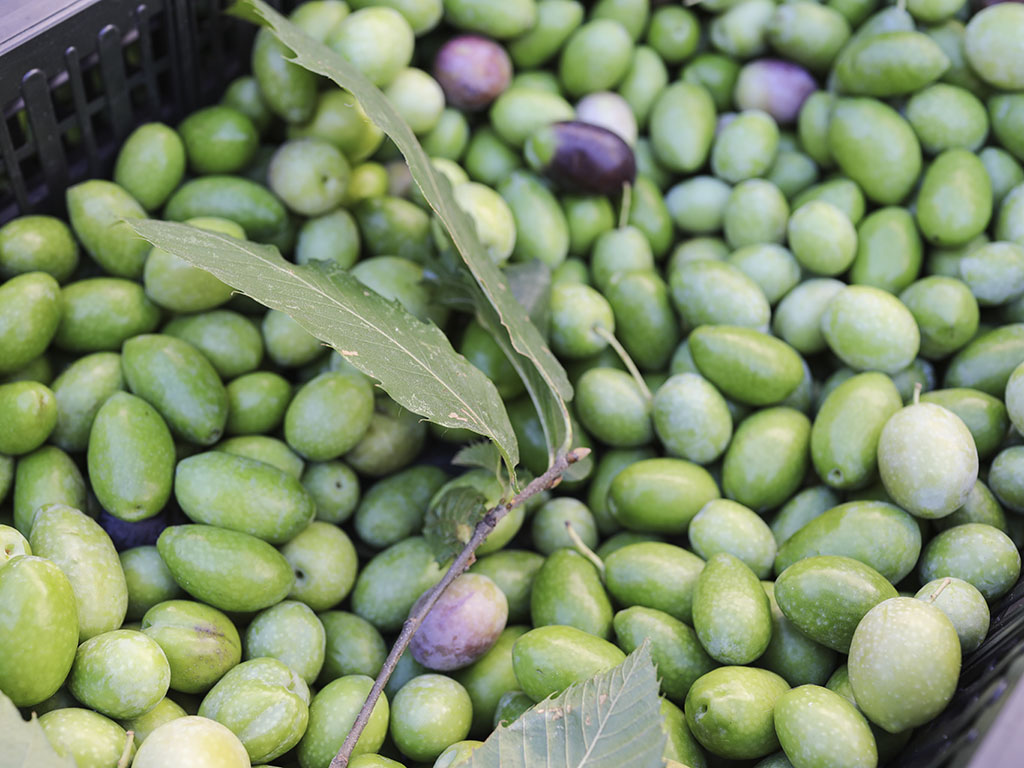 Then, the olives go through the cleaning stage to remove the leaves, stems or anything that could come with them, by use of air ventilators. Once cleaned, weighing and sampling is done in order to carry out the relevant analyses. The olives are then washed with drinking water to eliminate possible stones or mud. This step is not carried out if they are directly collected from the tree. 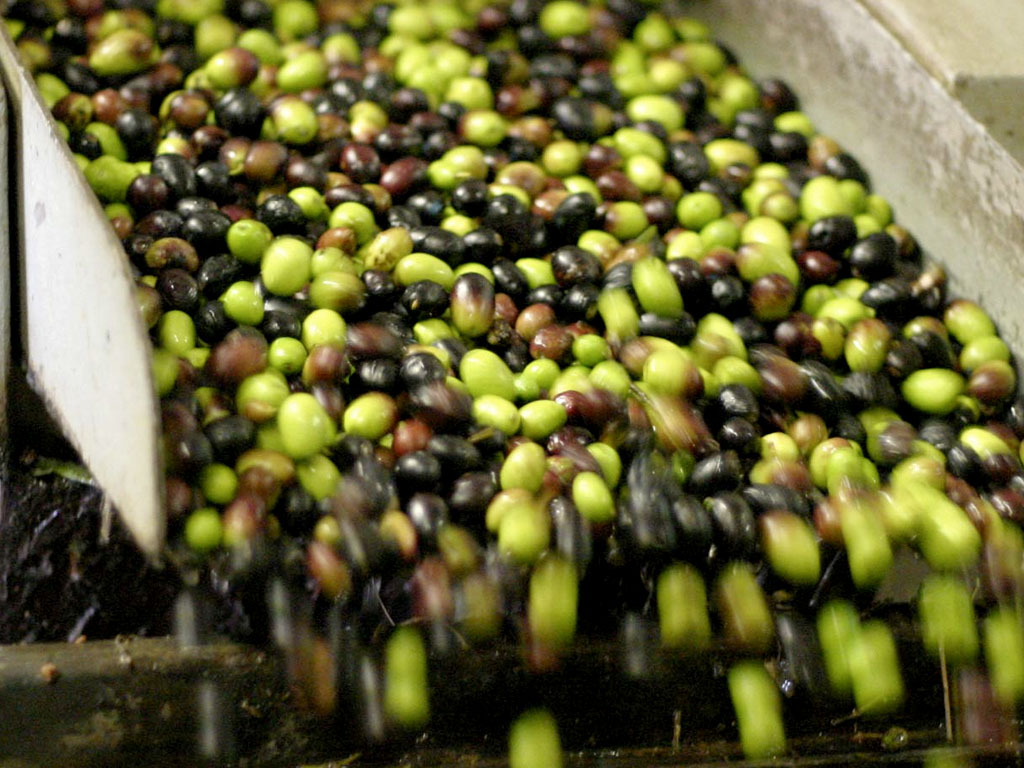 The grinding process must be done within 48 hours after the olives have been cleaned and washed as there could be fermentation and this would affect the quality of the oil. Grinding involves crushing and breaking the olive to facilitate the release and separation of the oil. For this process there are two methods: using a cone-shaped stone mill or metal shredders, which can be hammers with fluted cylinders or indented discs. 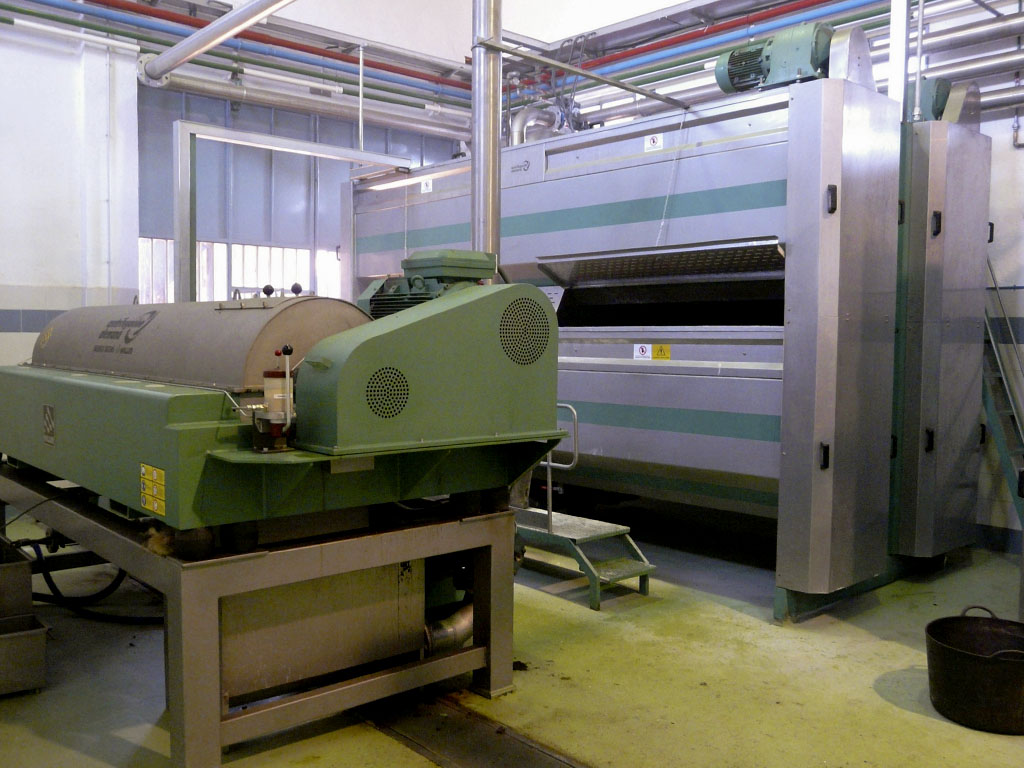 The dough that has been obtained after grinding the olives is whisked to facilitate oil release. Oil droplets are stored to form an oily phase that will be easier to separate from the aqueous phase and the solid phase. When whisking, the temperature must be below 30ºC so that the aromatic components are not lost and oxidation processes are not accelerated. 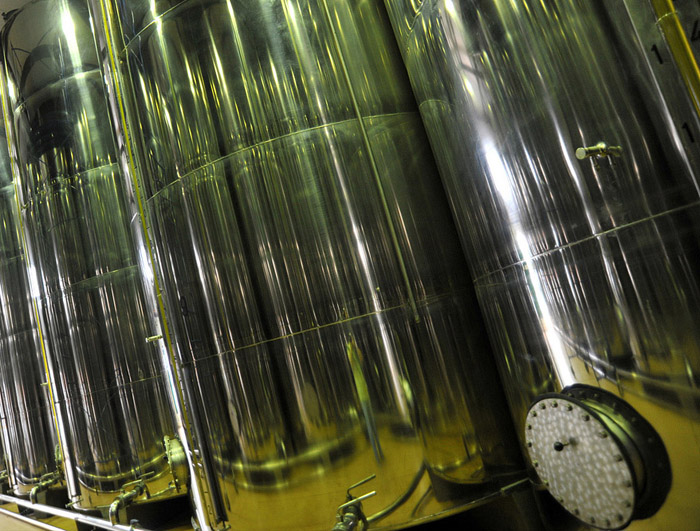 Once it has been obtained the oil has to preserved in optimal conditions so that it does not miss any of its qualities. Oil presses have ideal temperature, low luminosity, are insulated and contain closed tanks with taps and stainless-steel pipes so that the oil is not contaminated with smells or tastes. 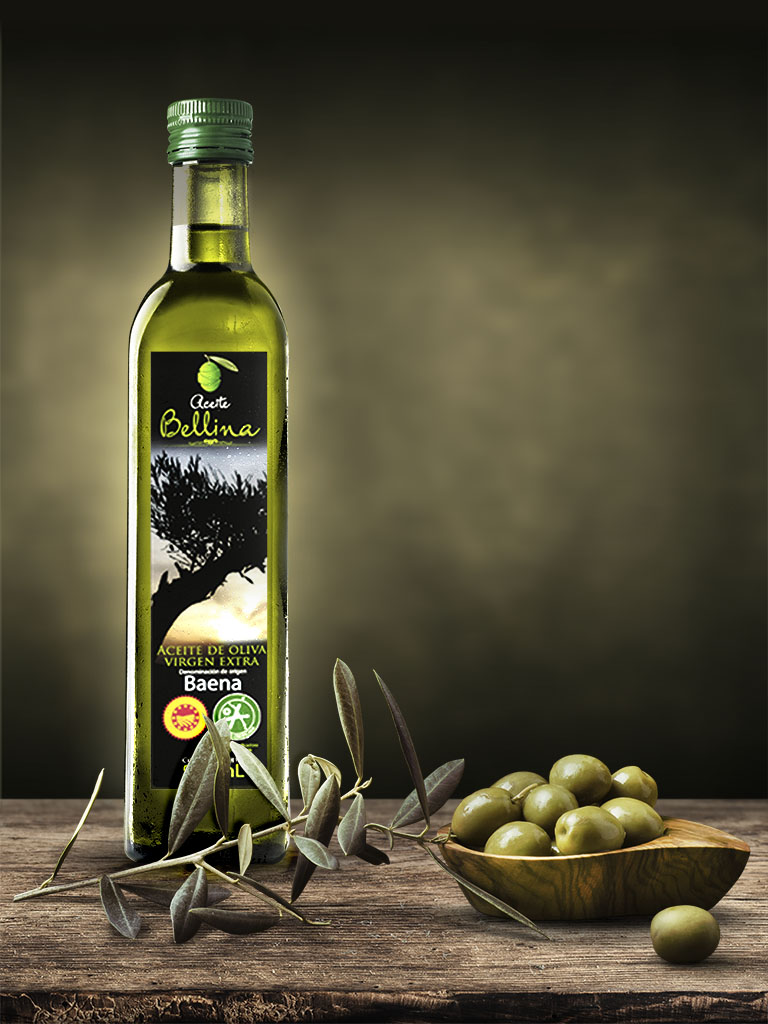 The following methods are used to separate the oil from the aqueous phase (Alpechín) and the solid phase (pomace): Using pressure or a system of presses: The dough is put on large discs of coconut and braided polyester, called ‘capachos’. These are stacked on top of each other by inserting flat discs at certain heights to balance the pile and improve the pressure. They are put under the oil press and they are then pressed. In this way, on the one hand, a rather dry pomace is collected, and on the other, a mixture of oil and water is collected in decantation pots where it is left to rest, to separate the oily phase (oil) from the aqueous phase, with remains of solid particles. In this way clean oil will float on top of the water and the solid particles, since it is less dense. This method requires a lot of cleaning and manpower, thus it has been abandoned. Using centrifugation or a continuous system: This system involves introducing the dough in a horizontal cylinder and turning it at high speed. In the absence of air, and along the way of the cylinder the pomace, the water and the oil are separated, due to their difference in density. This horizontal cylinder where the olive dough is introduced is known as centrifugal horizontal cylinder, and depending on the number of phases that want to be obtained we will find: 1.-Continuous three-phase system. A little water is introduced from the outside to increase the aqueous phase and to facilitate the separation of the oil. More water is consumed and more Alpechín is produced. 2.-Two-phase continuous system. No water is added from the outside, therefore the volume of the aqueous phase or Alpechín generated is almost none, hence it is also known as an ecological system.

We use cookies on our website to give you the most relevant experience by remembering your preferences and repeat visits. By clicking “Accept All”, you consent to the use of ALL the cookies. However, you may visit "Cookie Settings" to provide a controlled consent.
Cookie SettingsAccept All
Manage consent

This website uses cookies to improve your experience while you navigate through the website. Out of these, the cookies that are categorized as necessary are stored on your browser as they are essential for the working of basic functionalities of the website. We also use third-party cookies that help us analyze and understand how you use this website. These cookies will be stored in your browser only with your consent. You also have the option to opt-out of these cookies. But opting out of some of these cookies may affect your browsing experience.
Necessary Always Enabled
Necessary cookies are absolutely essential for the website to function properly. This category only includes cookies that ensures basic functionalities and security features of the website. These cookies do not store any personal information.
Non-necessary
Any cookies that may not be particularly necessary for the website to function and is used specifically to collect user personal data via analytics, ads, other embedded contents are termed as non-necessary cookies. It is mandatory to procure user consent prior to running these cookies on your website.
SAVE & ACCEPT